Our editors pick the products & services we write about. When you buy through our links, we may get a commission. Learn more.

Launch CRP129, CRP129E, and CRP129X are professional OBD scanners. They are very popular with motorists and mechanics due to their reliability, versatility, and user-friendliness. These scan tools are essential for diagnosis and clearing codes.

In this review, we shall take a look at the similarities and differences between Launch CRP129 vs. CRP129E vs. CRP129X.  To decide which scanner is best for you and your car, a comparison of models will help you make a well-informed decision. 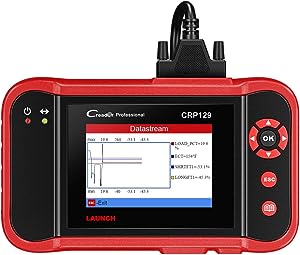 The Launch CRP129 scanner is very user friendly and will quickly find and display the trouble codes for your vehicle.
Check Price at Amazon

The CRP129, CRP129E, and CRP129X are highly portable and come in a compact design. They are easy to use even for people who do not have a mechanical background. They are plug and play, which means that they work straight from the box. You do not need any installation and drivers for them to work. 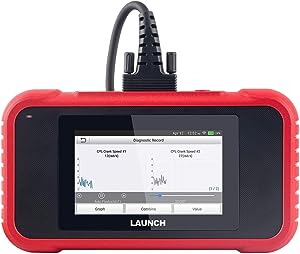 LAUNCH CRP129E can help to increase your car’s productivity and speed, with the menu navigation and auto vehicle detect.
Check Price at Amazon

In terms of functionality, all three scanners are capable of clearing and retrieving codes. They can also turn off the check engine light. Other standard functions include O2 sensor testing, data streaming, onboard monitoring and reading OBD2 freeze frame data.

They can diagnose the four main systems (the engine, transmission, ABS and the SRS). They all perform an Oil, EPB and SAS reset. In addition, three scanners can do smog tests, oxygen sensor tests, check your vehicle’s emission, check air-fuel ratio, and engine ignition. These tests will help to maximize your vehicle’s fuel economy. 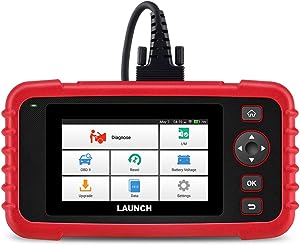 These Launch scanners not only read and clear codes but also store DTC data. They all have a DTC library which you can refer to when checking the codes.  All of them come with lifetime software upgrades, which means that your scanner will never be out of date. You can have a range of languages to choose from 9 languages supported.

The CRP129 and CRP129E have a different design to the CRP129X. The CRP 129E offers a touchscreen interface while the other two have an LCD display.

In terms of function, the CRP 129 has fewer features compared with the CRP129X and the CRP 129E. The CRP 129 can only check the health status of your battery through voltage testing. On the other hand, both CRP129X and CRP 129E can check the battery voltage, real-time monitoring and graphing. They also can support TPMS and throttle position reset while CRP129 doesn’t. The AutoVIN feature is available on these scanners, too.

The CRP 129 and CRP129X have a compact design. The user interface is an LCD screen, which measures 3.5 inches for the CRP129 and 3.6 for the 129X.  The controls are found on the side of the interface. Both CRP129 and CRP129X obtain their power from a rechargeable lithium-ion battery.  This makes it portable as contrasted with having a cord.

The Launch CRP129E has a touch screen interface with a high resolution. People having visual challenges will find it easy to operate. Compared to the LCD display on the other two scanners, this is a big advantage.

The major difference among the three scanners is the TPMS and throttle position reset. The CRP129E and CRP129X can perform these two functions while the CRP129 cannot.

Another major difference is AutoVIN, the system that identifies a vehicle. Both CRP129E and CRP129X scanners will identify your vehicles while the CRP129 will not.

Other function includes doing the smog test to determine if your vehicle is compliant with your local laws regarding emissions. You can conduct this test by checking the oil, air and fuel ratios against the set standards. Not only will it help with complying with the law but it also saves you money.

The CRP 129E and 129X have the added functionality of testing your battery. They have a voltage test to check if your battery has the requisite voltage. They go a step further and have real-time monitoring of your battery. This checks the battery over time with a graphical output.

The Launch CRP 129, CRP129E and CRP 129X are versatile OBD2 scanner supporting all the protocols of the OBD2 tests. The protocols are:

The CRP129 functions perfectly on most vehicles made from 2006, but it doesn’t support diesel engines and trucks. This includes some popular brands such as Ford, GM, Mazda, Honda, Kia, Nissan, and Audi.

The CRP129X can work with vehicles made after 2006. It will be applicable to GM, USA Ford, Mazda, Suzuki, Infiniti, Euro Ford.

The CRP129E covers more models including sports cars and light-duty trucks. CRP129E will support all makes covered by CRP129 but will extend coverage to some brands such as Bugatti, Bentley, and Rolls Royce.

In terms of software, the CRP129E uses more advanced software than the others. Its software is android based with a big amount of RAM to store as much data as possible.

The stored data can be shared with your mechanic or any other person.  You can even print this data. This feature is very important as you can clearly explain to your mechanic where the problem is.

The Launch CRP129E is hands down the best scanner among these three. Professional mechanics, DIYers, and the average motorist will love it and find it useful. It has more functionality and features. It also has a touch screen which makes it easier to navigate. However, it is a little bit costlier.

If you are on a tight budget and need some basic function for OBD2, the Launch CRP 129 will work just fine.

The CRP 129E is an advanced version of CRP129. The CRP129E has a different design and functions compared with the CRP129.

Functions: The CRP 129E can perform further features than CRP129. They are TPMS reset, AutoVIN, throttle position reset and the ability to read live PCM DataStream.

2. Will the scanners work on American vehicles?

4. Can you choose which scanner language you want?

Yes, all three scanners have 9 supported languages including English and Spanish

5. I am not a mechanic and have little experience with troubleshooting codes, Will I be able to use these scan tools?

Yes, these three scan tools are user-friendly and easy to operate. They are easy to set up as they are plug and play.